One of the problems that often surfaces in particularly old and deteriorated pipework is the presence of microscopic holes in the resonator, often invisible to the naked eye. These can prevent the pipes from speaking, or can greatly modify their sound. In the most common cases, the pressure loss of the wind column inside the resonator caused by the presence of these small holes will produce defects in the initial speech (too long “transients”) or instability in the running tone.

In the photos below we see a sixteenth-century pipe with highly deteriorated metal. Extensive metal surfaces which had disintegrated had to be meticulously replaced with new metal. Even after restoration, these pipes do not play to the best of their potential in most cases, due to the presence of holes that are invisible to the naked eye. At Fratelli Ruffatti we have developed an interesting technique to solve the problem: the pipes are analyzed in a dark room by introducing a source of high intensity light inside their resonators. The photo at right shows the light that filters through these otherwise invisible small holes. After soldering the small openings, the pipe will play correctly. The difference in terms of tonal efficiency is remarkable, especially in the regained speed of repeated attack, such as in a trill, even in pipes of large dimensions.

METAL PIPES: A NON-INVASIVE METHOD FOR RE-LOWERING THE MOUNTH CUT-UPS

It is common to find ancient pipes with structural modifications carried out during improper re-voicings. One of the most damaging modifications is the raising of the mouth cut-ups by removing metal from the upper lip of the pipe. In order to restore the original sound, it is necessary to bring the pipe mouth back to its original dimensions. The common practice among restorers for smaller pipes is to separate the resonator from the pipe foot, remove some metal at the base of the resonator, and re-solder the two elements. For larger pipes, common practice dictates the removal of additional metal from the upper lip in order to create adequate space for the soldering of a new strip of metal. Neither of these practices is in use at Fratelli Ruffatti.

We utilize a new, non-invasive technique, which prevents the loss of further original material by allowing the soldering of new metal directly to the edge of the mouth’s upper lip. This way, the integrity of the resonator’s original length is preserved, an aspect that has many important implications. This innovative procedure can be applied to pipes of all dimensions.

METAL PIPES: THE RESTORATION OF SOUND

Adding or modifying original nicking at the languids is one of the most frequent damaging practices performed on ancient pipes with the objective of modifying their timbre. The photo below is an example of this deplorable practice. We can see two interpolated successions of nicks: one with the smaller and more evenly made nicks, which is thought to be original, and the other with deeper, irregular nicks, which was likely added later in between the original nicks. A modification of this kind always causes a substantial alteration of the timbre of the sound.

For the restoration of the original sound, Fratelli Ruffatti has developed a technique by which the improperly applied nicks can be “cancelled”. The innovative aspect lies in the fact that this technique is reversible and non-invasive. A special glue containing lead is applied to the non-original nicks, one by one. After removing the access material, only the original nicks stay open and intact. The non-original nicks are still visible, but no longer efficient.

One of the most interesting results of the research conducted by Fratelli Ruffatti in cooperation with the Fraunhofer-Institut für Bauphysik of Stuttgart is the creation of a special software which allows us to visualize in three dimensions, and to rotate to any angle, the tonal spectrum of the pipes. The advantage in terms of documenting restoration is clear: the software allows us to store the visualized image of the sound modifications resulting from the restoration of voicing, highlighting the results in simple and precise form.

Before disassembling the instrument, if possible, or at our workshop, we record the pipe sound utilizing very sophisticated equipment. In real-time such sounds are translated into three-dimensional images. Upon completion of the restoration processs, the sounds are recorded once again in a comparable environment. By utilizing this procedure it is possible not only to document the “final” sound but also to make objective comparisons. The resulting tonal spectrums will form a part of the documentation of each restoration project, for future reference. 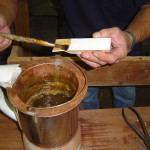 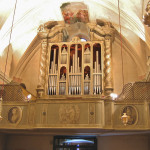